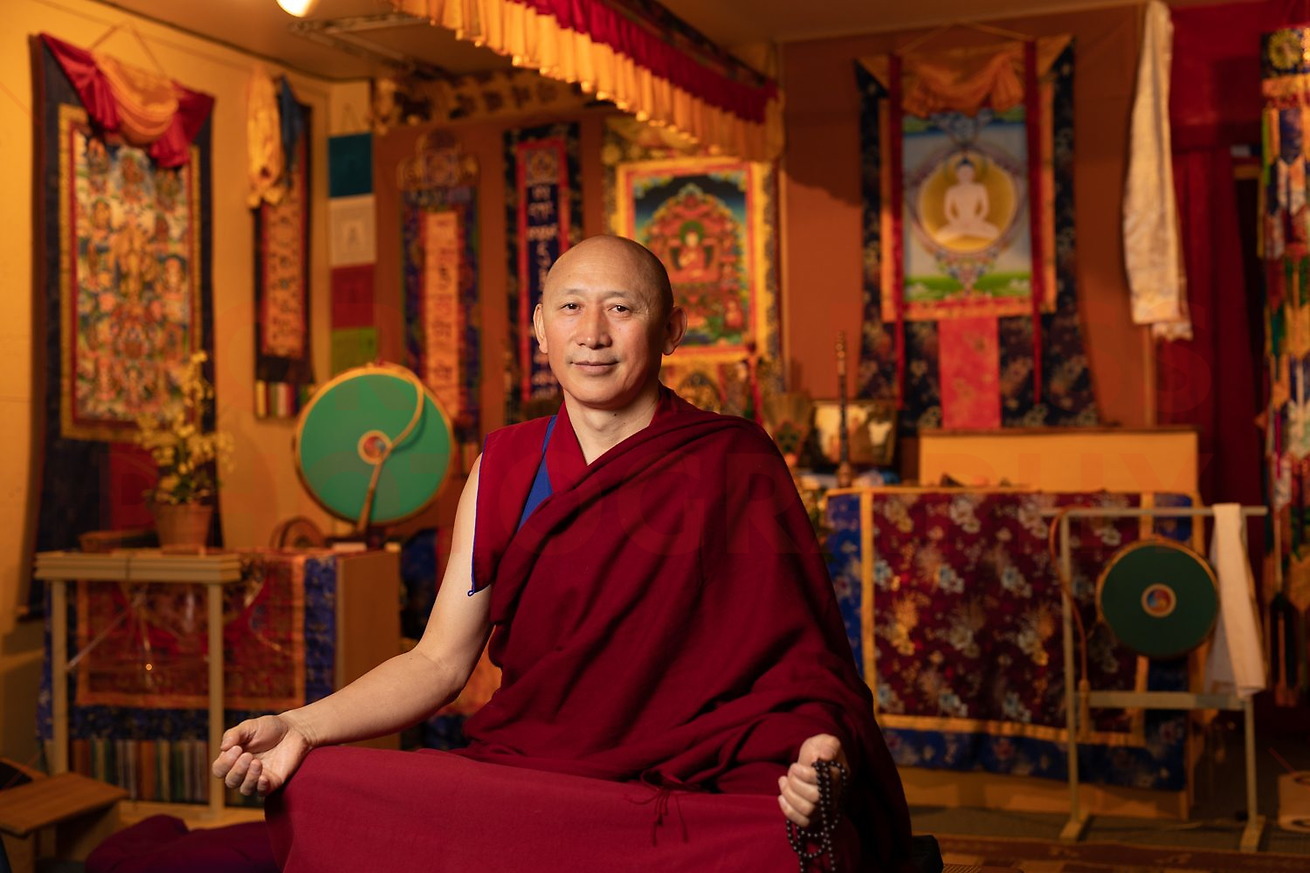 Geshe YongDong is the spiritual director and main teacher of Sherab Chamma Ling, a Tibetan Bon Buddhist Centre located in the Comox Valley. I took this portrait for CV Collective magazine.

There are 5 lineages in Tibetan Buddhism, Bon being one of them. Bon is the oldest of all the spiritual traditions in Tibet; Bon, a shamanic spiritual tradition, was the main spiritual tradition of Tibet before the arrival of Indian Buddhism in Tibet. When the first wave of Indian Buddhism washed over the Tibetan Plateau in the 8th century AD, it met with and merged with the native Bon tradition. This early syncretism of Indian Buddhism and the shamanic ways of Bon is one of the key differences that distinguishes Tibetan Bon Buddhism from the other Tibetan Buddhist lineages. According to Bon Buddhism, the teachings are an amalgam of the Buddha’s teachings, animistic ideas and practices as well as elemental rituals (earth, air, fire, water, space) that are linked to our chakras. The history of Bon is fascinating. If you want to learn more about Bon’s origins and practices, Sherab Chamma Ling is the only Bon Centre in Canada.

Philosophies and spiritual paths are one thing when they are presented on a page. They have much more “life” when presented by a good teacher and in the case of Geshe La, he is a Dharma heir of an unbroken lineage that stretches all the way back to the Buddha Tonpa Shenrab.  The term Geshe is actually an honorific title that denotes academic achievement. It is the equivalent of a PhD in Tibetan Buddhist scholasticism and reflects his deep understanding of Bon Buddhism. He came to Canada with just a few dollars in his pocket and knew very little English. Today, he teaches all over the world and is involved in a number of projects from teaching to translating ancient Bon manuscripts. It’s amazing how a life can shift—from a boy-shepherd in Tibet, to a refugee fleeing Chinese persecution, to running an international Buddhist centre in the West. I think he can scarcely believe it at times.

When I first walked into the highly ornamented centre of Sherab Chamma Ling and met Geshe La over ten years ago, I was struck by his wisdom and compassion. He has actually summarized the Buddha’s teachings as just this—the union of wisdom and compassion. Time and time again, I have heard him say that we are already perfect; we just don’t know it.  Or as he said at other times, we just forgot it, and that his job as a teacher is to simply remind us of our fundamental true and perfect nature. His teachings are rich and varied: from different forms of meditation and Tibetan Yoga (Tsa Lung) to practices such as phowa and sleep and dream yoga, Bon has a rich tradition of practice and philosophy.

His ability to make the Dharma personal is one of his greatest strengths. Ten years ago, while I was in the midst of some painful change, he offered this: “One of the greatest gifts you can give yourself is to let go”. I have come back to that teaching again and again over the years. Each time, it has proven to be a remarkable antidote. Attachment, according to Buddhism, is one of the three root poisons along with anger and ignorance. Attachment to ideas, to people, to things, to the self…It’s not always easy to let go, but we can try and we all do it differently. This one teaching really resonated with me and it stuck. It’s permanently in my self-help kit bag.

Geshe La teaches every Tuesday night at Sherab Chamma Ling from 7-8:30 pm. If you can’t make it to the centre, the teachings are broadcast live on Zoom.

For more information, go to sherabchammaling.com