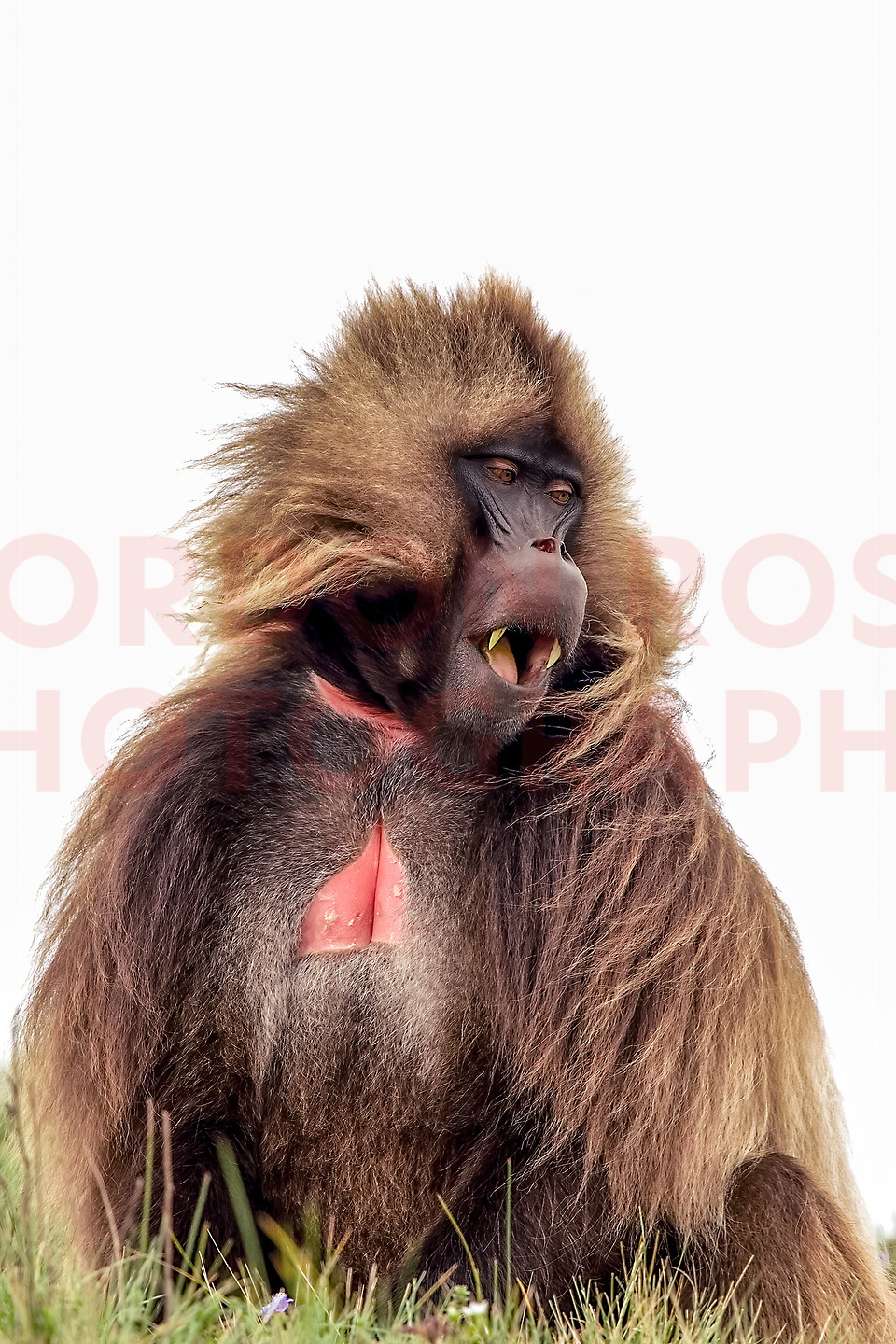 This shot of a gelada baboon was published in Audubon Magazine as part of a story on the geladas’ vocalizations and its resemblance to human speech. Years ago while I was guiding in northern Ethiopia, I had the chance to go into the Simien Mountains in the Ethiopian Highlands. Also known as the Roof of Africa, per sq. km. it’s the highest chunk of land on the continent. I took this shot at about 3000 meters (~10,000 ft) amid the stunning peaks and canyons of the Simien Mountains:

I had been trekking in these mountains with my group in a cool mist when we came upon a troop of geladas foraging on the grassland. The gelada baboon has wicked incisors and an equally fierce stare so you instinctively keep your distance. I shot this with a telephoto lens from about 40 meters away (for camera-types, I used a Canon L-series 100-400mm lens @ ISO 200, f/5.6, 1/250 sec at a focal length of 400 mm).

Remarkably, though, the gelada baboon is a herbivore (more specifically, a graminivore, or grass-eater) and their incisors are adapted for chewing grass. It’s the “chest plate” of the gelada baboon, though, that really captures people’s attention. The males’ patch is twice the size and more colourful than the females. The colour of the females’ patch is dependent on hormonal changes: when she’s in estrus, the female patch is brighter indicating her biological receptivity for mating.

Taken in the north of the country, you can see how fertile the countryside is. A stereotype of Ethiopia is that it’s a parched land with a flat topography. So, here I was in the Ethiopia, wet and at times actually cold. What a diverse place it is. Physically, the north is a rugged patch of mountains and canyons; the south is parched grassland with anomalies such as the sun-baked Danakil Depression which is actually 150 meters below sea level; the west of the country near Sudan is wetter with swamps and marshes; and the east is arid and rugged as you approach Somalia. Culturally, it’s just as wild and diverse but that’s for another post.